The Governor's Cup is awarded each year to honor a tourism partner whose event or organization has had a significant impact on the economy and quality of life for its community as well as the entire state. It is considered the top tourism award in the state.

"This is much more than a win for a brand and marketing campaign-it is a win for our region," said Ric Luber, President and CEO of the Midlands Authority for Conventions Sports & Tourism.  The Authority, whose mission it is to market and sell the Columbia area to leisure and business travelers and meeting planners, led the effort to develop a destination brand in 2008.

The branding and advertising campaign is entering its third year, having generated more than a million unique visitors to the Authority's web sites and over 750,000 video views on YouTube, along with more than 15,000 fans on Facebook and 8,500 followers on Twitter. In addition, more than 50 businesses and organizations have incorporated the new brand into their marketing campaigns and communications.

To develop the campaign, the Authority partnered with industry and community leaders, individuals who market the area and ADCO, a local strategic, creative and interactive agency to work through a brand identity process. "Famously Hot" rose to the surface as being unique, differentiating and attention grabbing, after the team of more than 40 individuals defined the essence of the Columbia area as The New Southern Hot Spot.

Tourism is a $1 billion industry for the Columbia region and supports 12,000 area jobs that provide services, products and amenities for visitors, saving tax paying households an estimated $675 a year due to the economic impact of tourism in the state.

The awards luncheon included remarks from Roger Dow, president of the U.S. Travel Association and director Chad Prosser of the S.C. Department of Parks, Recreation & Tourism.

This year's Governor's Conference was held at the Myrtle Beach Marriott Resort & Spa at Grande Dunes. A range of experts in the tourism business presented during the three-day gathering, and which also included the debut of the state's new "South Carolina: Made for Vacation" marketing brand. 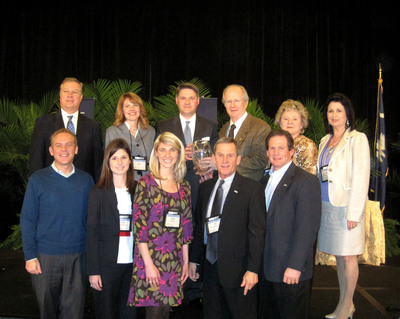 Members of the brand team accepted the award on Tuesday
at the awards luncheon during the conference.