Celebrate 'Famously Hot' Culture on Us 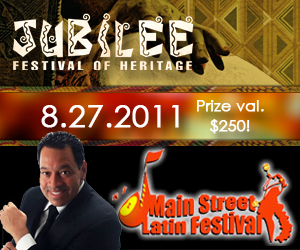 The Main Street Latin Festival and Jubilee: Festival of Heritage will both be held downtown in Columbia, SC on August 27, 2011. Celebrate 'famously hot' culture on us while enjoying two of Columbia's popular annual festivals and enter our sweepstakes!

Start your day at the 33rd Annual Jubilee: Festival of Heritage. Jubilee celebrates the life of Celia Mann and her descendants. Although only one house stands today, the Mann-Simons site historically was a collection of commercial and domestic spaces owned and operated by the same African-American family from at least 1843 until 1970. Jubilee: Festival of Heritage takes place on August 27, 2011 from 11:00 am to 5:00 pm.

The Jubilee experience includes:
â?¢ Hands-on demonstrations from some of the region's most skilled artists and craftsmen,
â?¢ Musical entertainment including R&B, jazz, blues and gospel with special performances from Drink Small and the Benedict College Concert Choir,
â?¢ Vendors with African-influenced and traditional merchandise, and
â?¢ Tours of the Mann-Simons Site, bus tours of African-American heritage sites, the Modjeska Simkins property, and
â?¢ Poster Contest, Yam Cook-Off, and Demonstration Artists!

Your Jubilee: Festival of Heritage prize includes:
â?¢ 4 tickets for a tour of the Mann-Simons Site
â?¢ 2 tickets for a bus tour of African-American heritage sites (to be redeemed the day of the Festival),
â?¢ 4 Historic House Museum Tour tickets for any Historic Columbia Foundation (can be redeemed at a later date, value $24)
â?¢ A special gift from the Museum Shop (value $25).

The 'Famously Hot' celebration continues as you make your way to the Main Street Latin Festival! You'll have plenty of time to enjoy the Festival, as After-Party festivities continue well past midnight!

The Main Street Latin Festival takes place in City Center Columbia on August 27, 2011 from 11:00 am to 9:00 pm. Bringing Latin culture and vitality to Columbia, SC.