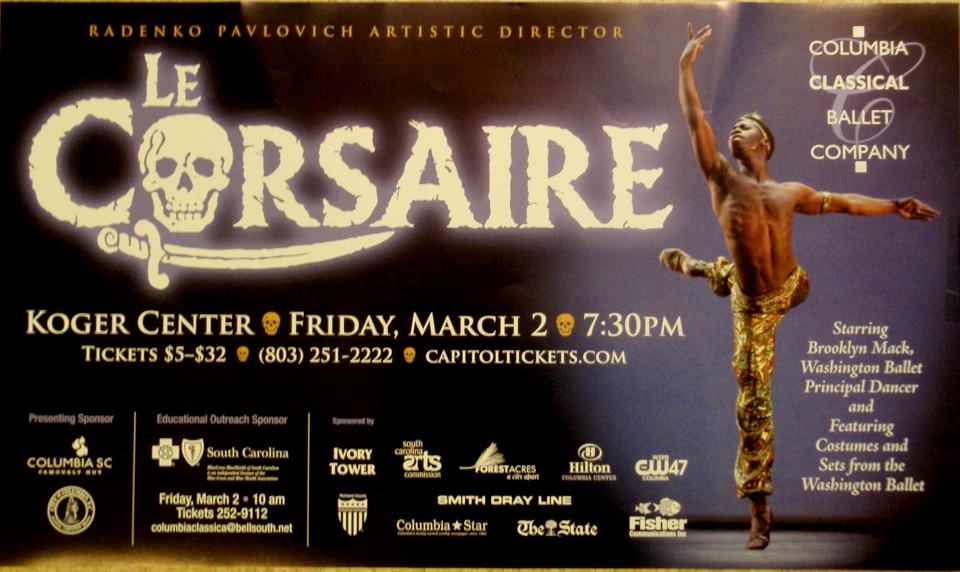 'This great work of the classical repertoire will be special in many ways,' said Radenko Pavlovich, artistic director of the Columbia Classical Ballet. 'Columbia has never seen anything like it.' The rousing story and dynamic dancing are only part of what makes 'Le Corsaire' (also called 'The Pirate') a must-see show at the Koger Center for the Arts.

While the ballerinas are usually at center stage, 'Le Corsaire' showcases the power of the men. Featured will be guest artist Brooklyn Mack, a member of the Washington Ballet who received his initial training from Pavlovich. Company members Christopher Miro, Oleksandr Vykhrest and Ivan Popov take leading roles. 'This ballet is about the guys and they really shine in it,' said Pavlovich. Visually, this will be a stunning production with sets and costumes used by the Washington Ballet and other companies around the globe.

Mack, named one of '25 to watch in 2012' by Dance magazine in January, will dance the role of Ali. A Washington Post review of his performance as Ali with the Washington Ballet called him 'a human missile.' 'It is like the role was made for him,' Pavlovich said. 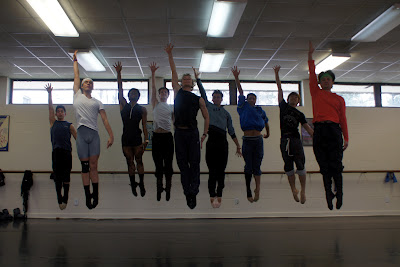 Miro, a native of Cuba and former member of The National Ballet of Cuba, dances the role of pirate leader Conrad. Vykhrest fills the role of Birbanto, Conrad's friend and betrayer. Vykhrest has been a member of the Classical Ballet of Kiev, Donetsk Ballet Company and the Sarasota Ballet. Popov, as the slave trader Lankedem, has been soloist at the Mariinsky Theater in St. Petersburg, the Vienna State Opera and principal dancer with the San Francisco Ballet and the Hungarian National Ballet. The role of Medora is being danced by Tamako Miyazaki, a native of Japan completing a stellar first year with the company, and Lauren Frere, who joined the company in 2008 and has been principal dancer since 2010, will dance the role of Gulnara.

Sets are by Simon Pastukh who has designed over 200 opera, ballet and theatrical productions for the Bolshoi, Mariinsky and Sovremennik theaters in Russia, NHK in Japan, the National Theatre of Norway and others. From 1980 to 1991 he was a resident designer at Michailovsky Opera and Ballet Theatre in St. Petersburg. Galina Solovyeva, designer for the Mariinsky Theatre in St. Petersburg for 15 years, created the costumes. Her career includes over 100 designs for ballet, opera, and theatre among them 'Othello,' 'Eugene Onegin,' 'The Sleeping Beauty,' 'Firebird,' and 'Swan Lake' for groups including the New York City Ballet and the Japan Ballet.

'Le Corsaire' was created in the late 19th century by choreographer Marius Petipa (the man behind 'The Sleeping Beauty,' 'The Nutcracker,' 'Swan Lake') for the Imperial Ballet of St. Petersburg. The original score is by Adolphe Adam (composer of 'Giselle' too) with additions by Cesare Pugni, history's most prolific ballet music composer, and several other composers.

The ballet has enough twists and turns to be a tale told by Shakespeare. A pirate ship manned by Conrad, his friend Birbanto and Ali sails into a harbor town where they visit a bazaar where slaves are being sold by Lankedem. When Conrad sees the slave girl Medora it is love at first sight. He and his crew steal her and the other girls, including Medora's friend Gulnara. Medora asks Conrad to free all the girls and he agrees, but Birbanto incites a mutiny. The mutiny fails, but Birbanto convinces Conrad he is blameless - then steals Medora and sells her to a Pasha. Disguised as pilgrims, Conrad leads the pirates on a raid to free Medora. The reunited lovers sail away, but are overtaken by a raging storm. The ship sinks. The ballet ends as the rising moon reveals Conrad and Medora safely reaching shore.

'We're happy to finish our 20th season with this amazing production,' Pavlovich said. 'It's a fitting end to this important year.'

Keep up with the latest Columbia Classical Ballet performances and information on Facebook.