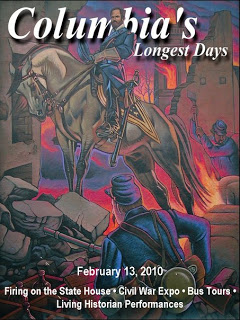 Join the Greater Columbia Civil War Alliance on Saturday, February 13, as it traces General Sherman's 1865 march to Columbia with a full day of activities including the re-enactment of Union cannons firing on the State House, Sherman's March bus tours and a Civil War Expo.

Having successfully completed his march to the sea by capturing Savannah in December of 1864, Union Major General William Tecumseh Sherman planned his invasion of South Carolina. His target was Columbia, the state capital where the secession movement began and considered by Sherman's generals to the be a richer prize and more important capture than any city in the South. On January 30, 1865, Sherman's 65,000-man army launched the invasion moving ten to twelve miles a day, burning a swath sixty miles wide in grim determination readily viewed as retribution. An abundance of alcohol greeted the Union army as it entered Columbia on February 17, 1865. Vengeful attitude fueled by drunkenness culminated in the looting and burning of the city--an act described by a Union war correspondent as "the most monstrous barbarity of the barbarous march." Visit www.shermansmarch.com for a video documentary of first-hand accounts of Sherman's March to Columbia and the burning of the city.

In commemoration of General Sherman's March to the Sea through Columbia and the burning of the city, a full day of fun activities for all ages will begin with Union canon firing once again upon the South Carolina State House. Join the troops as a spectator on the West Columbia side of the Gervais Street Bridge on the left.

8:45 am - Union troops fire on the State House at the same time and location as on February 15, 1865 (the West Columbia side of the Gervais Street Bridge)

9:30 am - Kilpatrick and the Burning of Lexington Tour

10:00 am - Medical Encampment at the top of every hour

10:30am - Artillery Demo every half hour

11:00 am & 2:00 pm - Living Historian Mary Boykin Chesnut performs:
Mary Boykin Chesnut, the daughter of a South Carolina governor and United States senator, was an enigma. Ardently against slavery, she was a passionate believer in states rights and a feminist who loved her husband. Part philosopher, political scientist and humorist, Mary is known today for her brilliant, shocking and poignant masterpiece that is a journal of the rise and fall of the Confederate States of America.

The expo includes artifact displays, performances by living historians, Mary Boykin Chesnut and Wade Hampton, as well as period music and a medical encampment on the front lawn.

Tickets for the bus tours must be purchased IN ADVANCE and are $20 per person per tour. Bus tours leave from the parking lot of the South Carolina State Museum at 301 Gervais Street. To purchase by phone, please call Bri Jackson at 803.217.0071. Tickets may also be purchased by emailing Bri Jackson at gccwa@knappagency.com.

Includes first-hand accounts of Union soldiers, reporters and Columbia residents; visits original earthworks built for the Confederate defense, enter the Riverbanks Zoo and Garden to walk along the Saluda River to see the remains of one of the largest textile mills of the early 1800s, see the bridge abutments of the Gervais Street and Saluda River Bridges that were burned by the Confederates and travel along the same streets that Union soldiers traveled as they entered Columbia.

Riverbanks Botanical Garden is one stop on the Congaree Creek bus tour that follows Sherman's march through Lexington County and into Columbia. Those interested in participating in the bus tour that travels through the Botanical Garden should select the 9:30 am Congaree Creek tour. The three-hour tour will recall first hand accounts of Union soldiers, newspaper reporters and Columbia residents.

'Many people are unaware that Riverbanks is home to some of South Carolina's most significant historical landmarks, and we are proud to share that rich history with the people in our community,' said Satch Krantz, executive director of Riverbanks Zoo and Garden.

Riverbanks has been listed on the National Register of Historic Places since 1973. Structural remains dating back to the early 1800s can be found throughout the park. On Riverbanks' grounds, bus tour participants will visit the Saluda Mill ruins and view the granite abutments of the burned State Road Bridge, which was destroyed during Sherman's March in 1865.

The Saluda Mill, one of South Carolina's oldest textile mills, was also set ablaze by Sherman and his troops. The ruins of the mill can be found along Riverbanks Botanical Garden's River Trail.

In an effort to further educate the community about the historic significance of the Saluda Mills, an Interpretive Center was built adjacent to the mill site in 1999. Artifacts, descriptions and graphics are displayed in the center at Riverbanks.

The tour will trace the route of Union calvary General Judson Kilpatrick and his calvary corps as it rode into Lexington, SC in mid February 1865. The tour will enter south of Lexington and visit some of the sites of the Union occupation of Lexington. The sites include: the John Meetze House, circa-1850, which is now the Caughman-Harmon Funeral Home; the Hendrix-Callison House, circa-1830, where Kilpatrick questioned a youth wearing a Confederate uniform during the occupation; the Lemuel Boozer house, circa-1828, home of Lexington's Unionist mayor whose son was shot for his Unionist leanings. The tour will visit local cemeteries and other little known sites related to the burning of Lexington. The tour will end at the Lexington County Museum and visit the John Fox House. Mr. Fox was strung up by the neck by Union soldiers three times from a beam in this house, as they wanted Mr. Fox to reveal the location of hidden silver and valuables.

Travels to the southern boundary of Lexington County, where the Union army entered; visits skirmish sites along the North Edisto River and makes stops at Jeffcoat's, Horsey's and Gunter's Bridges, where dismounted Confederate cavalry and artillery disputed the Union army's crossing the river. local re-enactors will make these skirmishes come alive.

The Greater Columbia Civil War Alliance sponsors the annual event that commemorates General Sherman's March to Columbia and the burning of the city of Columbia. February 13, 2010 will mark the 5th annual Columbia's Longest Days and promises a day of activities for all ages.