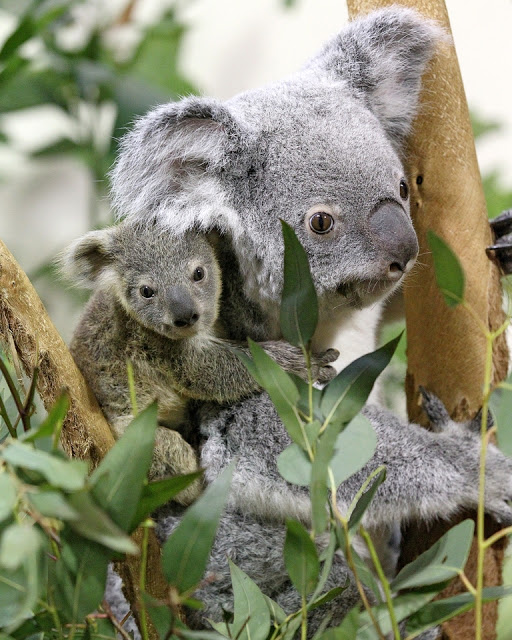 Next time you visit Riverbanks Zoo and Garden, be sure you stop by Koala Knockabout to see the Zoo's newest resident, a koala joey.

To onlookers, the baby koala may resemble a small bear, but it is not a bear at all; it is a marsupial, like the kangaroo. The koala mother has a pouch where she carries her young during development.

Born last May to parents Jimmie and Lottie, the joey ' named Owen ' spent nearly seven months growing in his mother's pouch before making his first public appearance at the Zoo.

'Keepers observed movement inside Lottie's pouch in September, but it wasn't until November that they got a first look at Owen,' said John Davis, curator of mammals at Riverbanks Zoo and Garden.

A koala joey starts out about the size of a jellybean. It travels through the birth canal to its mother's pouch where it nurses for several months. As the joey grows, it can be seen exploring the outside world with an arm or leg ' or even poking its head out of the pouch ' for short periods of time before building up enough confidence to venture out completely.

Now too large for the pouch, Owen spends most of his day clinging to his mom's back or tucked around her belly.

The koala joey will remain at Riverbanks for the next several months while he continues to grow. Once he reaches about a year old, he will be mature enough to be weaned from his mother. Ultimately, the koala will be transferred to another zoo based on breeding recommendations from the Species Survival Plan (SSP).

Owen is the second offspring for Jimmie and the fourth for Lottie.