South Carolina's shrimp and grits is in the running for America's best food!

Three weeks ago, CQ Roll Call began the search for the dish that would become the "Taste of America." Each state was paired with a signature dish and voters brought those 50 delicious dishes down to the "Elite 8." Now, only 8 states remain to fight for the title of the dish that will be the "Taste of America." We may be a little biased, but we have to say South Carolina food is superb -- especially our beloved shrimp and grits.

The National Restaurant Association and South Carolina Restaurant and Lodging Association recommend Columbia's Blue Marlin Steaks & Seafood for the palmetto state's most loved dish. Their grits come locally from the only working mill left in South Carolina and whose neon sign is a Columbia landmark, Adluh Flour Mills. The grits are stone-ground and topped with South Carolina creek shrimp, andouille sausage and tasso gravy. Hungry yet? 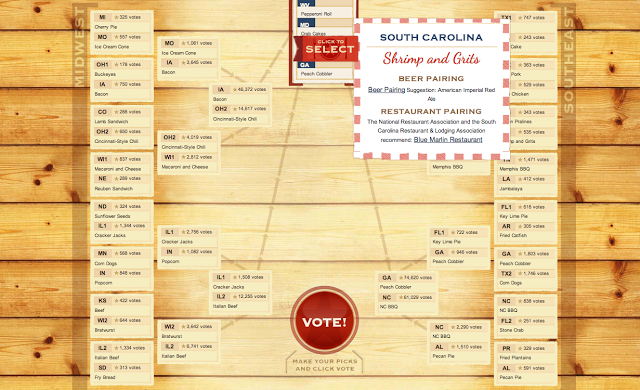 Think South Carolina should be the Taste of America? Here's how you can help Shrimp and Grits take the title of America's best food.

Vote: Head to the Taste of America website and vote for South Carolina's shrimp and grits as many times as you'd like - there are no restrictions. Voting ends this Friday, June 7 at 5:00 pm and the winner will be announced on June 13, 2013 at the Elite 8 reception at Nationals Park in Washington, DC.
Spread the word on Twitter:
Think @Discover_SC has America's best food? Vote @VistaBlueMarlin @columbiasc shrimp & grits at @cqrollcall: http://ow.ly/lEJKM (Tweet this)

Think South Carolina has America's best food? South Carolina's Shrimp and Grits are in the final round of voting for CQ Roll Call's Taste of America competition for America's best dish. Vote for the palmetto state's signature food, just like you'll find at Blue Marlin in Columbia, SC: http://ow.ly/lF37N