Everyone Has A Dream or a Great Idea - What's Yours? 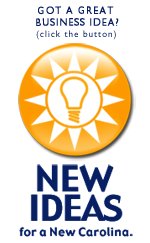 Share your ideas for business that stoke your fire, blow your mind and show your get-up-and-take-charge-of-my-dream spirit.  Your idea could bring new jobs, new energy, new talents, new life and new wealth to South Carolina.

So what are you waiting for?  Enter your Idea at www.NewIdeasSC.com by December 2nd for a chance to win!