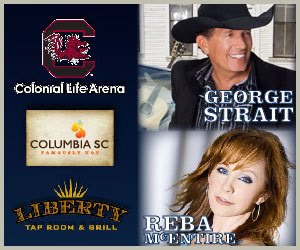 The King of Country George Strait performs some of his new favorite songs off the album Twang as well as old favorites! Super-hit maker Reba McEntire, who has 33 albums, brings her high energy stage performance to the Colonial Life Arena for the first time. Lee Ann Womack will return as the opening act. 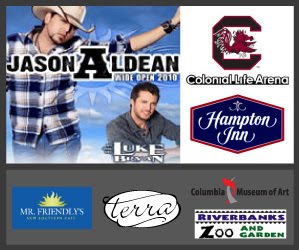 Enter to win two (2) tickets to see Jason Aldean and Luke Bryan at Colonial Life Arena on Saturday, October 2, 2010 at 7:30 pm plus a Meet and Greet, one (1) weekend (Friday and Saturday nights) stay at the Hampton Inn Downtown Historic District, two (2) tickets to Riverbanks Zoo and Garden, two (2) passes to Columbia Museum of Art, a $75 certificate to Terra, a $50 certificate to Mr. Friendly's New Southern CafÃ©, Cellar on Greene or Solstice Kitchen and two (2) famously hot t-shirts.